Everybody who is programming is using one or more of them. My favorite programming editor is Epsilon from Lugaru Software Ltd., and that since 1996. It’s around since 1984. Although my first version was for DOS, Windows, and OS/2, I used it primarily under DOS for writing C programs. I started in 1978 with a BASIC dialect and 8080/Z80 assembler on a Sord M203 mark II computer. 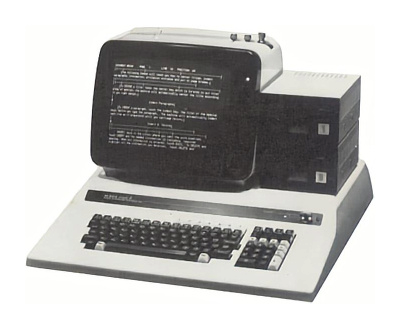 I wasn’t thinking about what editor to use back then, because there was no choice. I had to use the one that came with this Sord computer. A little later I switched to C and then C++, followed by Java in 1996. There will be something after Java, but I can’t see it yet. It’s not so much the programming language itself that keeps me, but the Java platform. 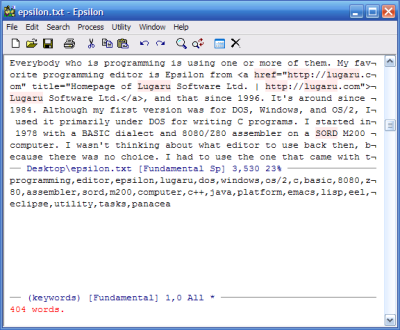 Epsilon is an Emacs clone, but unlike Emacs, which can be extended with Lisp code, Epsilon uses a C-like language called EEL (Epsilon extension language). As you can see from the list of programming languages I’m sufficient familiar with, Lisp isn’t on it, but C is. Although this short enumeration of programming languages isn’t complete, I haven’t used any of the others for a substantial amount of time. It’s important for me, that Epsilon is programmable in a language I’m fluent in.

There’s one exception to my otherwise consistent use of Epsilon. When it comes to Java programming, I’m using Eclipse most of the time. Not always, because some things I still do with Epsilon, but most of the things are a little easier within Eclipse.

During the time I worked with Epsilon, I observed a strange thing: some programmers (even brilliant ones) worked with editors that are not supporting them well with their work. Even when shown alternative editors that would support them much more, they gave up early on learning the features of the new tool. Instead, they spend hours writing some small utility programs for tasks that are possible within minutes for editors like Epsilon. Instead of investing the time in learning a new tool, they spend much more time with fixing the shortcomings of the editors they were used to.

Don’t get me wrong, Epsilon is not a panacea for everything, and I’m gone the minute I find something better. But in the past 10 years, I haven’t.