On May 31st, 2014, the Linux distribution Linux Mint 17 (named “Qiana”) Cinnamon has been released. Since I wanted to replace Ubuntu Linux on my Lenovo ThinkPad with something else (but nothing too far away from it), I choose Mint Cinnamon (64-bit). Installation was easy and fast, but then I had to redo the installation of my CMS synformation on that machine (simply because I use it as a development and test machine). Java 1.7 (OpenJDK) was installed already, so I had to install Tomcat, MySQL, and Apache. Here, I’ll only talk about Tomcat and Apache, because I choose to use another way to integrate both: I had used mod_jk before and was looking for an easier way. 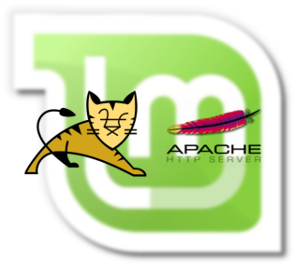 There are several ways to integrate Tomcat and Apache:

Integration with the proxy module

You need to open a terminal window in order to execute the following commands.

Install Apache and Tomcat (with manager application, is needed later as a test case):

If it’s alreay enabled, you get something like the following message:

Now you can use either HTTP or AJP for integrating Tomcat and Apache.

Edit the file /etc/apache2/sites-enabled/000-default.conf (or whatever .conf file for one of your sites you want to use) and add at the bottom:

If you want to use AJP instead of HTTP, follow section B.

You have to enable the AJP connector in Tomcat’s server.xml (/etc/tomcat7/server.xml, the line is there but commented out; activate the line):

Edit the file /etc/apache2/sites-enabled/000-default.conf and add at the bottom:

If you want to actually work with the manager application, you have to configure roles and at least one user for Tomcat. Edit the file /etc/tomcat7/tomcat-users.xml and make the element &lt;tomcat -users> look like this (you should try to come up with a more original password than I have):

Don’t forget to restart Apache after you make configuration changes:

To access the manager application through Tomcat (and not Apache), you would use http://localhost:8080/manager. But now it’s time to try out the path via Apache and then Tomcat: visit http://localhost/manager in your favorite web browser and log in with the user admin and the password you’ve defined (mine from the example was admin). Does it work?

If you have other web applications installed in Tomcat, you can access them via Apache, too. Simply add more <location> elements to your Apache configuration.

In a production environment, I would recommend using the AJP connector and disabling the Tomcat HTTP connector in the file /etc/tomcat7/server.xml, so all traffic has to go through Apache.